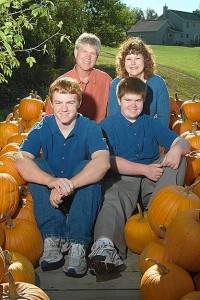 The Brimley Pumpkin Farm came about through Doug's lifetime hobby of growing pumpkins to sell to the public.

Growing up on Sandhill Road in Mason, Doug would grow pumpkins in the backyard garden and then sell them off a wagon by the road.

Later, after Doug and Becky were married and moved to Mason, Doug would sell his pumpkins in the front yard of their first home on Okemos Road. Doug would grow his pumpkins on their land on Every Road and transport them back to their house to sell.

The Brimleys finally moved to their "pumpkin patch" on Every Road in late 1999 when they built their new home.

The Brimley Pumpkin Farm was featured in MasonToday on October 4, 2014.